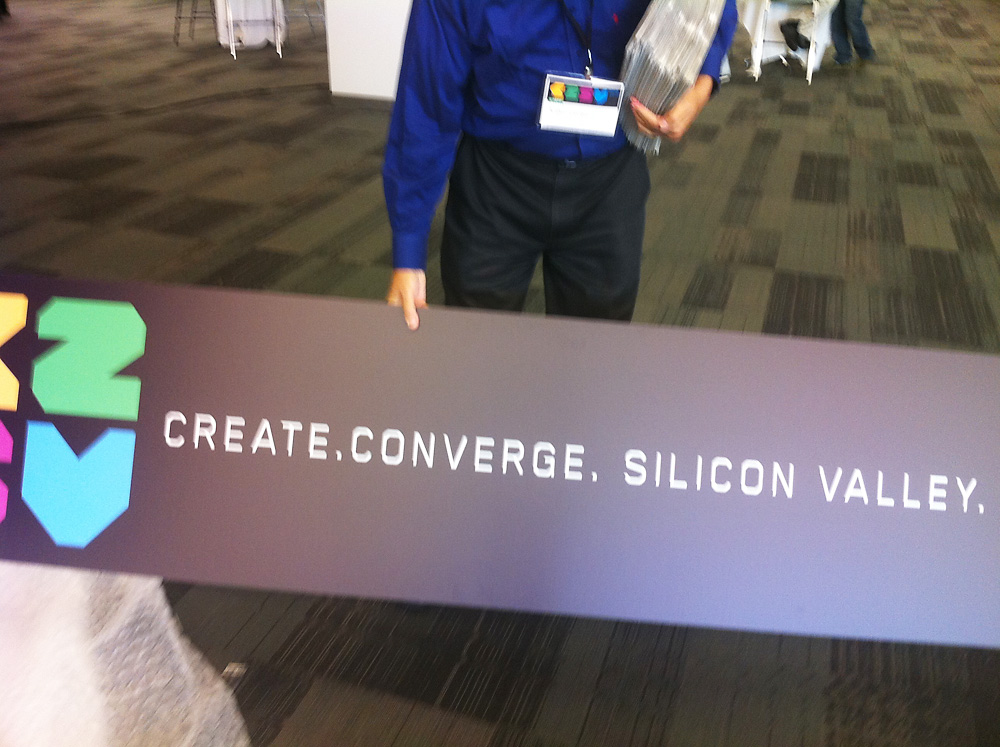 San Jose ‘s inaugural TECH + MUSIC fest is on, and I was there to find weirdness, live-tweet the event, and be part of San Jose bringing it to the people in a big, big way. I brought my list of Mountain View folks to connect with, but figured that this being the greater overarching umbrella of a Silicon Valley Creative Convergence, I wouldn’t worry too much about who was from where and just go and get in the mix. For the record, Mountain View is Silicon Valley, being that the first silicon semiconductor was developed here by Shockley labs in 1956.

The San Jose Convention Center lobby was lightly packed with folks, I was honestly a bit shocked that it wasn’t more crowded, but then again I did arrive late and there was a session in progress. The branding for Creative Convergence Silicon Valley is pretty stellar. A future-minimal typeface, and nicely balanced 4 spot color brights on black. Then there’s this secondary logo with a hand flashing a peace sign and tiny additional hands reaching out from each of the fingers. The hand makes no sense but I like it.

As I checked in, the staff was lovely, helpful and full of bright smiles. Me representing WeirdMountainView.com with an all access platinum pass, I pitched my purpose to the dude at the counter and he immediately suggested I check out the Content Magazine booth, mentioning it was similar to what I was attempting in Mountain View… finding the freaks, independents, and dirt-path Dionysians. I hesitated not, and soon met Daniel Garcia, known simply as “the cultivator.” Holy s**t, was I in the right place or what. Mr. Garcia chatted with me for a while and I felt like I was among my people. Now, me being Mr. McBlog-a-few and Daniel Garcia having an actual staff and a beautifully printed high-end art magazine that could hold it’s own on any newsstand next to Surface or Wallpaper, I wasn’t quite deluding to grandeur, but, I could see that he was doing for San Jose what I could aspire to do for Mountain View. I stood in front of the heavy-weight black-drop and gave the camera my best look skinny pose.

I entered the conference room, where I met Ryan Peterson, a freelance music photographer also representing WeirdMountainView.com. I last saw Ryan at the KFJC listener appreciation party and before that at the Black Pus show up in Frisco at the Hemlock Tavern. Ryan is hilarious, he’s an introvert’s introvert, but at a live music show he’s one of those guys who’s at, against, or behind the stage within sweat distance of the band – fearlessness dialed through that SLR like a laser. I’ll have some bitchin rock shots from the music portion of C2SV right here, in a few days.

Here are some highlights from the conference speakers on Friday:

Jeremy King, Walmart Labs CTO, and John Squire from Decision Intelligent Commerce talked about the future of intelligent eCommerce. I wanted to check out what Jeremy King had to say, since Walmart Labs is based in Mountain View about 2 blocks from Weird Mountain View headquarters. Not a big Walmart shopper myself, but was curious considering the depth of their pockets, the number of customers, and the amount of data they have at their fingertips. As of this moment, I am not convinced that the Walmart in-store experience will be replaced by device-based smart shopping by the time iPhone 7 comes along, but I’m no expert. 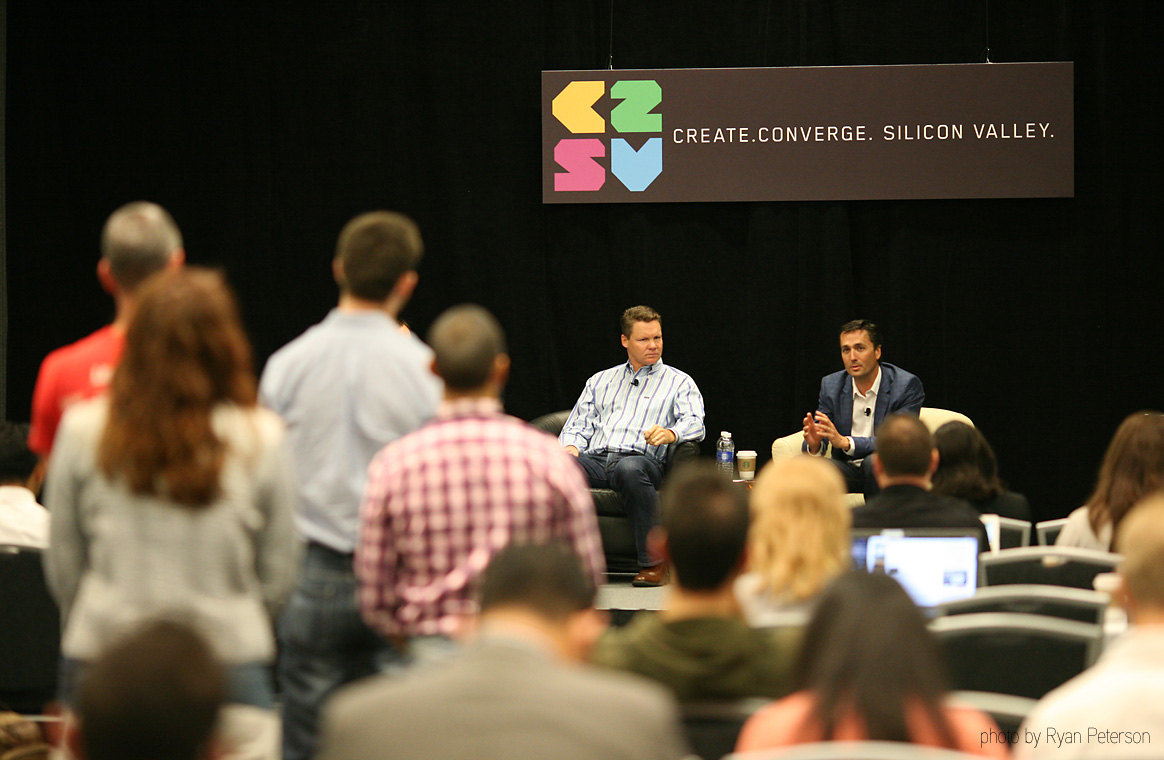 Next on my interest list was Privacy Protection and Your Personal Data Ecosystem, a solo presentation by the legendary Steve Kirsch. An accomplished “serial entrepreneur”, he invented and owns a patent on an early version of the optical mouse, and his current company is OneID. “I’ve got 1 wife, 3 kids, 2 cars and 352 usernames and passwords,” states Kirsch, who knows and believes his script. He is convincing. Kirsch goes through a list of all the people you can’t trust, and asks the audience “who can you trust?” An audience member correctly answers “yourself.” And the concept of OneID takes flight in the room. All one’s info. in one secure place and no passwords ever again. This is an OUTSTANDING idea, but I can’t help but wonder how much personal-data-info-money all the different companies with all your different passwords would lose if this were the single standard for all log-in, credit card purchase, and medical transactions made using a device. 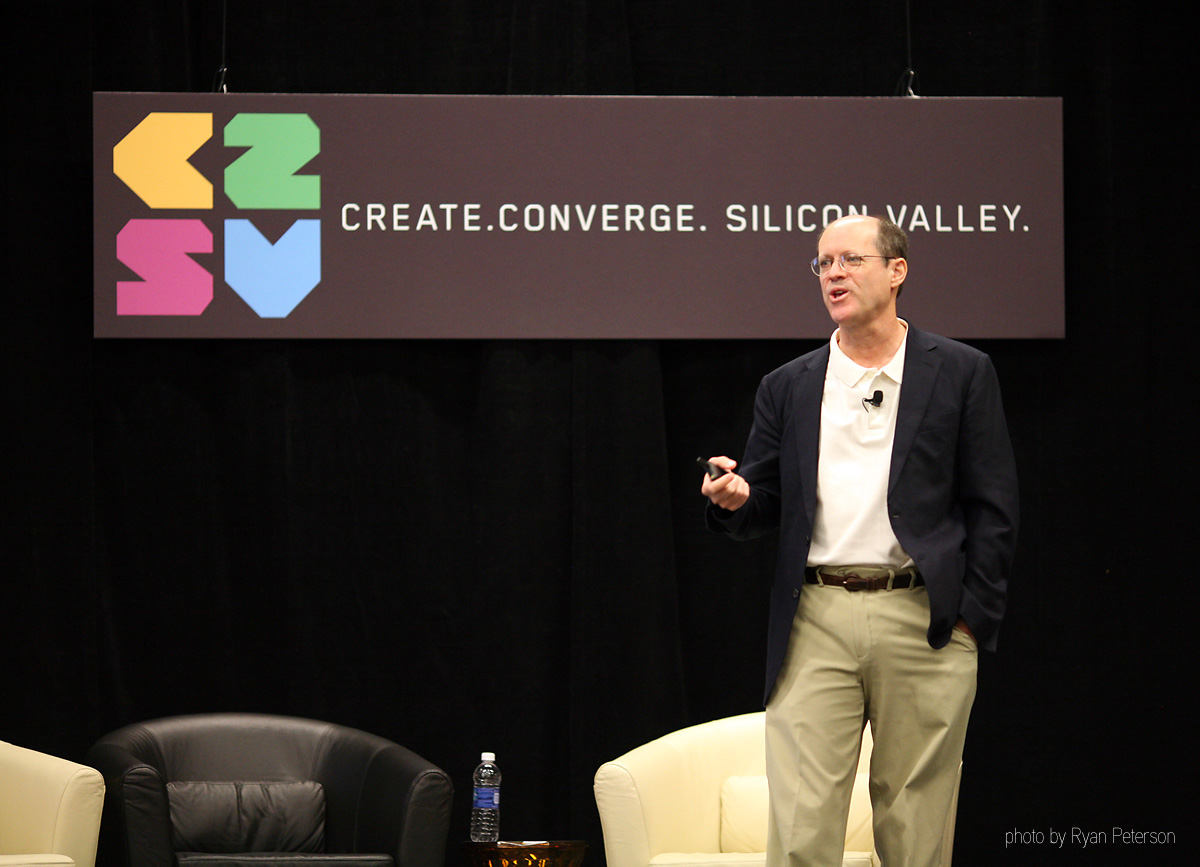 Next up, Friday’s main event, and Steve Wozniak and Nolan Bushnell did not disappoint. Woz co-founded Apple, Bushnell founded Atari, both worked closely with Steve Jobs. There they were, on one stage, together. They talked about working with Steve jobs and traded back slapping, ball-busting war stories. They set the conference back by 30 minutes, but honestly, they could have kept going and folks would have loved it. 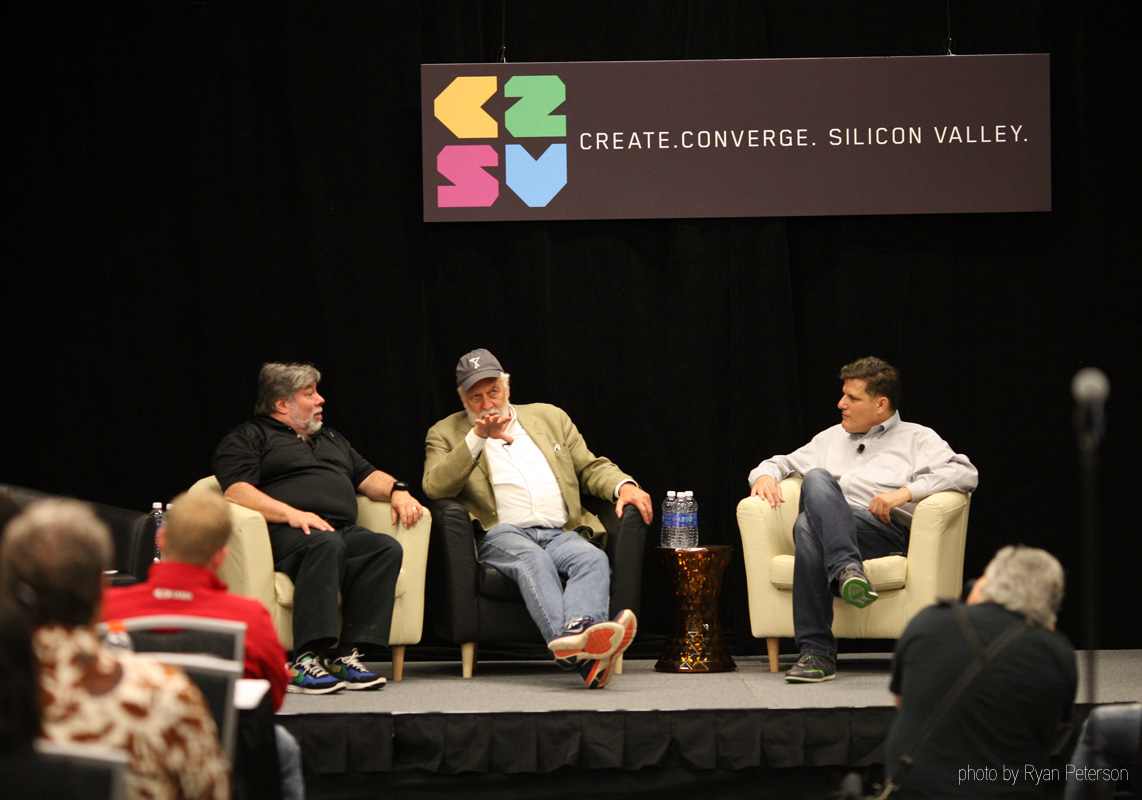 Apps, the Web and URLs – The Future of Search and Navigation rounded out the day for me. Liron Shapira, CTO of Quixey was joined on-stage by Nic Meliones, Peter Hoddie, and Kevin Marks. They talked about “search” and redefining the presupposed. Are apps going to change how we search? If Quixey has it’s way, then yes. Shapira knew his script and is creating a search engine for apps. I was interested in meeting Shapira after the panel, since his company is right across the street, and he has a background in improv comedy which interests my own self as well.

Stay tuned for the music portion of our coverage and check @telekidesign for live tweets from Saturday’s conference. WeirdMountainView.com will be all over town Saturday night checking out bands/live acts. And you can bet your grandmother’s rosary we’ll be at St. James Park Saturday evening to see the Thee Oh Sees then Iggy Pop and the Stooges.

The C2SV conference schedule is here.

The C2SV music schedule is here.

One Response to "C2SV- Silicon Valley Takes Over the World"