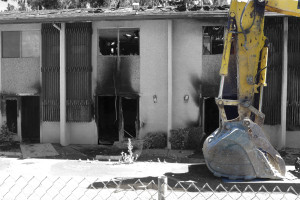 2 days after this photo was taken, the old Tropicana Lodge was flattened. A two-alarm fire char-gutted the building on the evening of Sunday, April 28, and closed down the westbound lanes of El Camino Real for several hours. The Mountain View Voice reported the story on Friday, May 3.

Two 15-year-old Mountain View boys were arrested for trespassing at the Tropicana earlier in the day. There were beer cans, cigarette butts all over the place, but the duo told police the beer was “not theirs” and “neither were those cigarettes.” Odds are, those 2 had nothing to do with the fire. It’s pretty well known among the bad kids aged 15-32 that the old Tropicana is a place to get loaded, burn things, piss on the walls, sniff glue, huff paint, or even indulge in medicinals. Amateur “me too” graffiti artists have given it their best shot all around the place, especially in the pool. The pool is now full of building debris, worthless to even hard core hoarders and collectors. 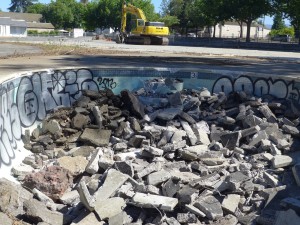 Prometheus Real Estate Group purchased the hotel site and the property right next to it early in 2012. “We are planning a new, state-of-the-art, luxury apartment community for this property,” says Jon Moss, executive vice president. During his 12-year tenure at Prometheus he has been responsible for $800 million in development, including several Mountain View projects happening right now. Prometheus is the largest private owner of multi-family properties in the San Francisco Bay Area.

Back in the glory days, the Tropicana Lodge is where many people’s parents stayed when they visited Mountain View as kids. The building was also used as a fire training building for the Mountain View fire department. As already mentioned, the building was most recently used as a place to trespass and toke up, hang with good-time Charlies, jump back over the fence with spray cans emptied or left behind, smokes in pocket, buzz on. A memory, now nothing, soon luxury apartments. In the name of progress, dumb-dumb boys and girls will have to find another spot to take a break from it all. Once the new luxury apartments are built, “well adjusted” adults can pop bottles of expensive wine after a tough Monday at the office, then check email again starting around 10 PM.