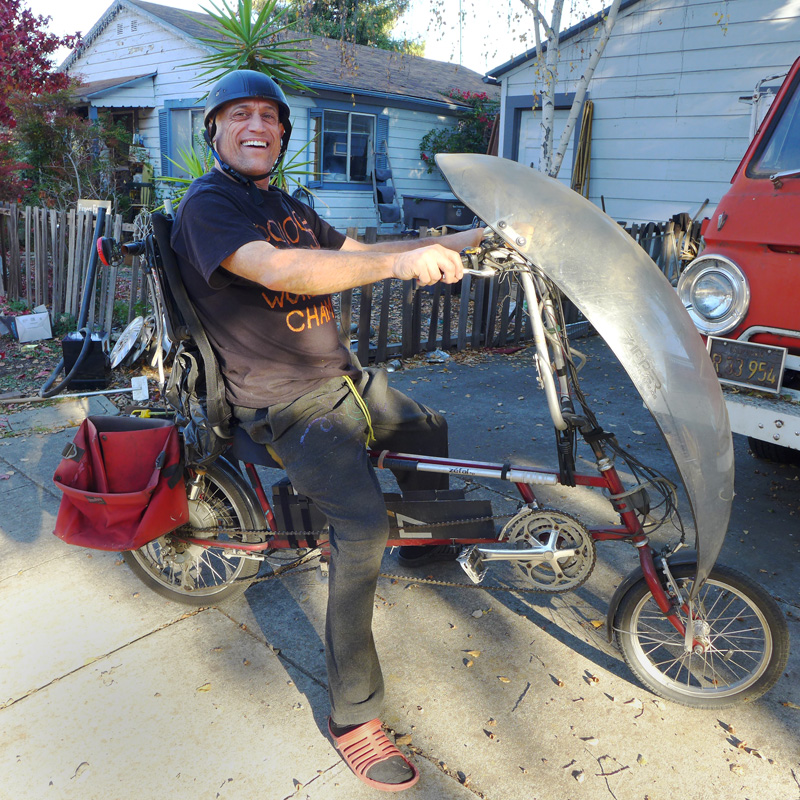 When Mountain View resident Gary Castro agreed to talk to me, I knew I was in for a treat. Gary is a unique and colorful resident of the Castro City neighborhood and one of the nicest guys you’ll ever meet. Truth be told, his visual and personal presentation screams “Weird Mountain View,” so I figured the conversation would be downright unusual. What a surprise to find that he is just a regular guy with great stories to tell about the neighborhood. Like any other decades-long resident, he offers a perspective that newcomers will appreciate.

I am a product of the 60s on the far end of the hippie movement. Otherwise, I am your typical Italian-Mexican-Native American who sees things a little bit differently.

Neither of those is correct. When I was interviewed by the local Mountain View Voice a few years back, they thought maybe I was part of the Mariano Castro family, one of the original Castros. But, I am not. I had to set them straight, though; I’m just a free bird.

How long have you lived in Mountain View?

I bought this house and have lived right here since 1979.

What was this neighborhood like when you moved here?

A lot of it was old houses like mine, built in the 30s, 40s and 50s. This area was originally built as housing for Stanford University students and faculty. The streets are named “Leland”, “Stanford”, and “University.” Get it? It’s small enough, and cozy too. But when I first lived here, there were pockets of bad people. By bad I mean drugs being the main issue. It was well known that certain families were involved with drugs. Other than that, it has always been very quiet.

The population here was primarily Latino families, low to middle income. A lot of these houses were very reasonably priced since they were so old. Many residents here were second generation, so their families had been living here even longer. Definitely not high-income folks, however. There used to not even be any sidewalks here. This area was unincorporated before the city annexed it at some point.

I’ve heard realtors call this area University Park, but the residents here call it Castro City. Which is it?

Well, that’s actually 2 different things. If you drive on Rengstorff going south as you approach Central Expressway, there is a historical marker that represents the Mariano Castro family and is a historical delineation for the Castros who lived here. University Park is more in line with the Stanford University thing I mentioned and it is listed this way on the Santa Clara County record map.

How has this neighborhood changed since you’ve lived here?

There’s been tons of property that’s been bought up, leveled, and “upgraded.” So it’s been “bettered,” if you measure it against common thinking, as higher income level people have moved in. The neighborhood is, and always has been, very quiet. The ideal thing about this neighborhood is, it’s still a 3-block cul-de-sac that goes nowhere, so there is never any traffic in here. No matter how booming it is on El Camino or California Street or Central Expressway, nothing is really happening here, so it’s great. I don’t see it changing all that much as far as neighborhood quality of life or crime waves up or down.

Despite the reputation of Castro City from years gone by, there really isn’t any more crime here than in any other pocket in Mountain View. Would you agree?

Well, there was one time that the windshield on my RV got shot up with a BB gun, but that was in response to something that I did. Someone had been living in my RV without my permission, so I stole some of his clothes and then posted a note outside which read something like, “Hey, if you want your stuff back you need to pay me for renting my RV.” So, they responded by shooting out my windows, which seems like juvenile stuff, kid stuff, not actual crime. Like I mentioned before, there were a couple families who were involved with drugs, but those folks are not here anymore. Then this one time in the 70s, this guy was stabbed on the street right out front. But that was before I lived here.

Beyond this neighborhood, what do you think about the development, the building, and the rapid expansion happening elsewhere in Mountain View?

Personally, I’d like it to stay quieter, not so hustle and bustle. There are many mega-complexes going up. I know all this growth keeps the economy going, but where are all these people fitting? Where are they all working? I get boggled in the mind by it all. It is what it is. You can’t really stop it.

Gary, I’ve seen you around town on an interesting bicycle. Tell me about bicycling.

I’ve been a bicycle enthusiast my whole life. In high school I used to ride to the ocean via Highway 92, then come back on Highway 84. I’ve got several bikes now. The one I ride the most around town is an electric recumbent bicycle. It’s my trademark these days. Bike riding and volunteer work keeps me young at heart.

How did you get involved with volunteer work?

I worked for many years in machine tool technology. I used to be the foreman at a machine shop. But now am on long-term disability, so I got bored. I wanted to give back to the community and get involved with helping people. So I started out by volunteering at a drop-in center for HIV/AIDS in San Jose. As things go, they lost their funding and completely shut down. I’d always ridden my bike past the Ronald McDonald House at Stanford and, being a kid at heart, it seemed like a good fit for my next gig. So I applied and they let me do it. Since I’m an off-the-wall kind of guy, I don’t always fit the requirements that places are looking for, but the Ronald McDonald House saw my potential. I’m fun and lighthearted and that is enough for them.

What’s the weirdest thing you’ve ever encountered in Mountain View?

When they first built the Shoreline Amphitheater back in 1986, THAT was big news. The thing is, back in that time, hippies and others were still doing the wild thing and hanging out. People would sneak up to the top of the mountain behind Shoreline. There would be huge packs of people and they were up there smoking and partying. You could sneak into the back, but no one could see because of this huge mound blocking the view. You could hear the music and the hillside would be packed with people. It was a fun time for all. Of course, they eventually cracked down on it and you can’t do anything up there anymore. They have mountain patrol and motorcycle patrol and I think they even have dogs up there sometimes.

What is the best thing about living in Mountain View?

Well, you know what they say, “location location location.” I am a Bay Area native so I know it firsthand, but I hear others who come to this area tell me that this place is just the cat’s meow. The drawback is, of course, that everyone wants to be here so it’s getting very crowded. Back when I was a kid there were a few cities, and big open space areas in between. Now, one city blends right into the next. Mountain View, for me, is in the heart of Silicon Valley and the weather is perfect. It’s too hot in San Jose. As far as this neighborhood goes, there is no traffic and it’s ideal.

Your house is on a relatively large piece of land. Have you had offers from realtors?

Yes. Yes, I have. The most recent offer was a couple months ago. This house needs quite a bit of work done, but is about the condition it should be in for a house that was built in the 1930s. Realtors and investors come up to me all the time and I know their look now. So as soon as they approach I tell them “$2 million” then their mouth drops and they usually leave me alone. This last guy thought about it and said, “How about $1.2 million?” Then my mouth was the one that dropped. I paid $80,000 for this house with an old high school buddy back in 1979. My sister and her husband owned it and gave us a fair price. This is actually 3 lots wide, since this whole neighborhood is made up of 30 ft. wide lots. My lot is 90 ft. across the front and 131 ft. deep.

What would you like to see in Mountain View that isn’t here now?

Mountain View is one of the few cities in the Bay Area that is so solvent it’s ridiculous. There is Rengstorff Park around the corner, which is my favorite park. There are so many other excellent parks all over the place. There is so much going on; in the summertime they have free concerts, free movies. If I were to come up with something then that isn’t already here, that would just be selfish. My needs are met and then some. If you can’t find something to do in Mountain View, then you aren’t looking hard enough.