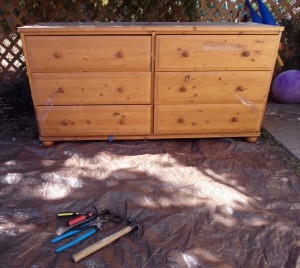 In the spirit of repurposing an IKEA resource, I was determined to transform a 10-year old IKEA dresser into something extraordinary. The mother of invention, and of our 6-year-old, reminded me of the necessity of a bigger bed for our son, since he is extra tall. Shopping around for twin-sized bed frames was an education in how much people can charge for uninspiring crap, so I decided to build my son a bed frame. My goal was to build a twin-size bed frame using only the lumber from this IKEA dresser (fig. 1).

First, I completely disassembled the dresser. I took off all the hardware and fasteners, removed the drawer bottoms and stripped this thing down to wood pieces like a kit of parts. I would be using my own drywall screws and wood glue for the final assembly of my bed frame, so I “recycled” the hardware, fasteners and particleboard drawer bottoms. 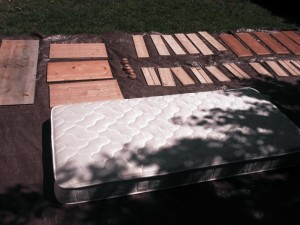 Next, I laid out all the wood pieces from the dresser case, drawers and drawer-fronts to get a sense of what I really had to work with (fig. 2). I spread my kit of parts around the mattress, and got out my sketchbook to start designing this masterpiece. Like I said before, I was determined to only use the wood from the dresser to make this happen, so as I sketched it became clear that an unconventional solution was needed. Rather than a traditional bed frame structure with forces from the mattress being transferred to horizontal wood slats, then to the sides and legs of the frame, I came up with what I call the “waffle-truss” – any force applied to the mattress go right onto the diagonal skeleton below that part of the mattress and directly to the ground. I arranged the pieces in a full-size rough mock-up of what I thought might work (fig. 3).

I decided to build the sides, footboard and headboard first, and then figure out the details of the waffle-truss later once I started screwing the support pieces together. The headboard was the only solid piece, cut from the dresser top. The 2 sides and footboard of the frame had to be made from multiple pieces, but I wanted the appearance of a single long piece of lumber. To solve this, I screwed and glued the drawer faces to the inside of the frame, so from the outside it looks like one long piece. These drawer faces (which I cut to the same height as drawer sides) served double-duty – 1. as the connector pieces for the sides and footboard of the exterior frame and 2. as edge support for the mattress as part of the waffle frame. 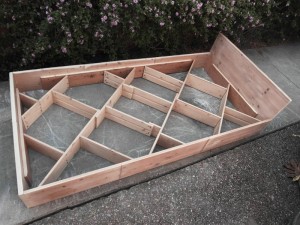 Once I squared-up and screwed together the exterior frame, I laid out the under-mattress waffle-truss at 45° to the frame so I could use a triangle and build it quicker without too much math. I ended up using every single remaining piece from the drawer sides, and used the shorter uncut lengths as my spacing guides (fig. 4). And, of course, I used a generous quantity of drywall screws, which I call “thinking-man’s duct tape.” 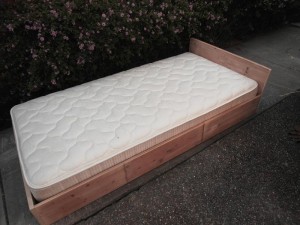 All assembled, a quick sanding and the moment of glory was here (fig. 5). Mattress – on, 180-pound man – on… no cracking or splitting sounds… success. My son loves it, he loves that his Dad made it for him and, as it turns out a “no jumping on the bed” rule comes with it’s own built-in consequence.