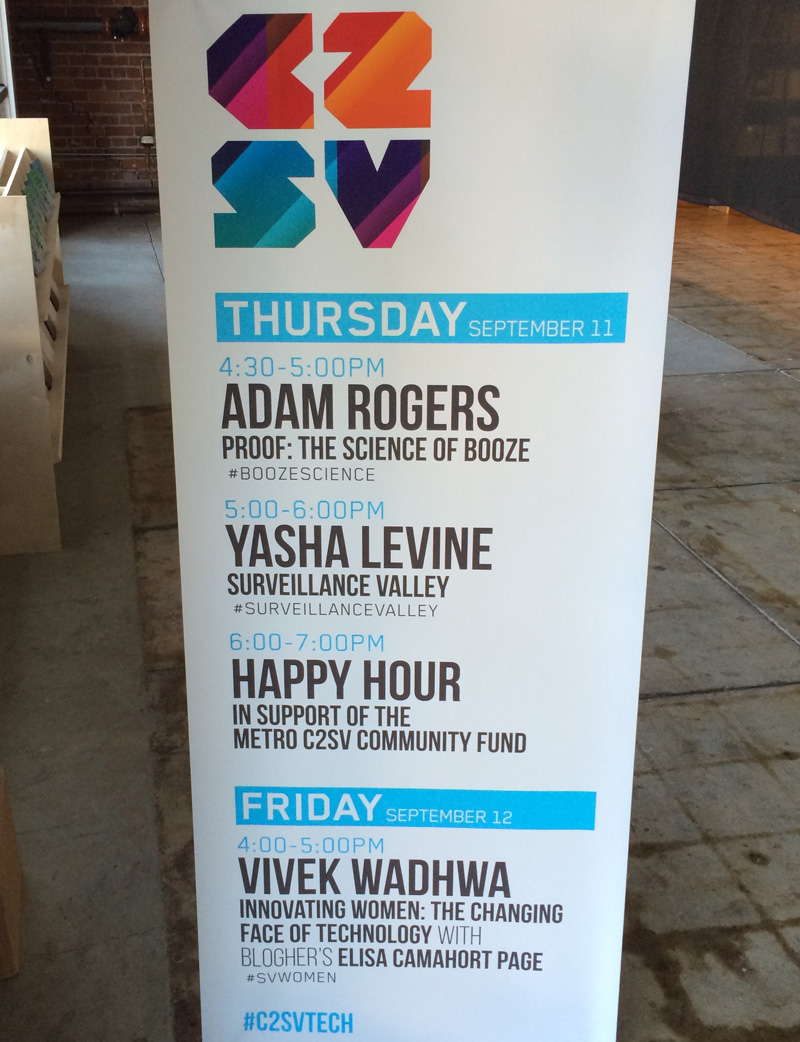 C2SV is a little different this year.

Last year, Steve Wozniak, Nolan Bushnell, John McAfee, and Iggy Pop headlined the inaugural event, a tech conference by day, nightclub meander by night. The first festival was reminiscent of the South by Southwest model in its intent. It’s hard to imagine how that could be topped. Maybe David Bowie and a virtual Steve Jobs? But what are the odds of that happening, really.

This year, Creative Convergence Silicon Valley presented 3 intimate tech chats with seating for 50 guests instead of hundreds. Adam Rogers, Yasha Levine, and Vivek Wadhwa with Elisa Camahort Page were up close and personal in the Zero1 art space. Instead of out-of-town headliners, there is a local music showcase and a street fair. This is a noticeable shift towards a smaller-scale event.  Knowing C2SV organizer Dan Pulcrano, I have to trust that he knows what he is doing. So I figured, why not ask him…

Dan, why the pivot from last year’s approach?

We didn’t want to be just another corporate conference with pipe-and-drape. We wanted to connect to a geography. And we chose the SoFA District, San Jose’s music and arts district. We rehabbed and moved into a new building and worked with neighboring venues—clubs and arts organizations—as co-creators.

Another goal was maximum inclusiveness. We wanted anyone who wanted to attend to be able to, so we made everything free. Free shows, free technology discussions, a free festival, even free refreshments. Any money taken in as donations was directed to community organizations through our community fund. The goal was to make C2SV a community event.

The third piece of the evolution is the return of the SoFA Street Fair. We wanted to bring it back last year and were able to include it this time. When we saw the reaction to the announcement, we knew that concentrating on that would add authenticity to the experience.

What is C2SV’s role in connecting to San Jose? To the greater Silicon Valley community?

Well, San Jose is the less glamorous but very solid anchor of Silicon Valley. The work force lives here. The courts and government centers of Silicon Valley are here. The engineers are educated here. The valley’s top creative branding firm, Liquid Agency, is here. We want to bring together a recognizable community, rather than a bunch of commuters. San Francisco, Oakland, Palo Alto and Mountain View have all been consumed by the social media, mobile devices and apps boom, and now San Jose is starting to feel it. It seems like it’s just getting started here. And San Jose has the capacity to sustain it. Mountain View is already spilling over into Sunnyvale to accommodate big company growth. Facebook jumped from Palo Alto to Menlo Park. And San Francisco is compromising its character by high-rising to accommodate all the poseurs flocking to the Bay Area to live in $5000 apartments and hang out in coffee shops with laptops and bicycle messenger bags.

We do see Creative Convergence Silicon Valley as a regional event though, and we’re interested in incorporating events in Mountain View and Santa Cruz into the mix. One of the valley’s most innovative programs is Mountain View’s Silicon House, and their founders helped us brainstorm some of C2SV’s early concepts.

Is there anything you would do differently now that you’ve done this twice?

Well, like many start-ups we grew too fast last year and needed some time to catch our breath. Now that we’ve done that, we’ll have a longer planning cycle. And next year, there will be more venues in SoFA ready to stage a major event.

What is your vision for C2SV going forward?

The broad goal is to connect the digital revolution to geography and history, to give it a context and a place where we can connect offline, celebrate, collaborate and create. We want C2SV to be smart and fun and for everyone.

Pulcrano’s evolving vision is in motion. As we are in the early stages of the current tech boom and tech is more integrated into everyone’s daily life than ever before, it remains to be seen if the geography of San Jose can sustain any spillover from neighboring communities’ explosion of growth. There is room to expand within the existing downtown, and certainly room for culture to expand within the existing urban landscape.

In a strange way, C2SV still follows the South by Southwest model, but rather than emulating the glitz and glam of celebrity SXSW, C2SV has restarted at the roots of the San Jose community and is allowing the local character to define the flavor of future festivals. This seems like a recipe for long-term success.

C2SV is held in September each year. Check back here for banter and photos from Sunday’s SoFA street fair.